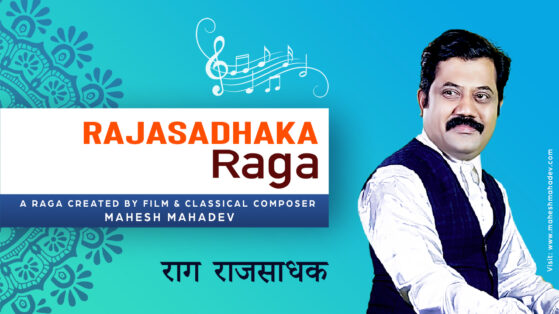 Rajasadhaka is a rāgam created by Mahesh Mahadev in Carnatic music & Hindustani Music (musical scale of South & North Indian classical music). It is a pure Janya raga and adheres to the strict rules of the Indian Classical Music and it is also an innovation in the world of Western Musical scales and modes. This janya rāgam (derived scale) from the 65th melakarta scale Mechakalyani. It does not have all the seven swaras (musical notes) in both the ascending & descending scale. Mahesh Mahadev has named the equivalent of Rajasadhaka in Hindustani music as Rajasadhak. Rajasadhak belongs to the Kalyan thaat of Hindustani music. Rajasadhaka means “The Royal Achiever”  This raga dedicated and named after India’s Great Scientist ‘Padmashri’ Dr. Y. S. Rajan. The first composition in this raga is Mahesh Mahadev’s English song ‘Transforming a Rickety Workshop’ penned by Dr. Y. S. Rajan

Rajasaadhaka  is a symmetric rāgam that does not contain madhyamam or nishadham in ascending with dhaivatham and gandharam in its descending scale. It is an audava-audava rāgam (meaning a pentatonic scale). Its ārohaṇa-avarohaṇa structure (ascending and descending scale) is as follows:

Rajsaadhak is a symmetric rāga that does not contain madhyam or nishadh in ascending with dhaivath and gandhar in its descending scale. It is an audav-audav rāga (meaning a pentatonic scale). Its āroh-avaroh structure (ascending and descending scale) is as follows:

Royal Achiever is an innovation by Mahesh Mahadev in the world of Western Musical scales and modes. This scale is symmetric and pentatonic in nature. Its structure is as follows: