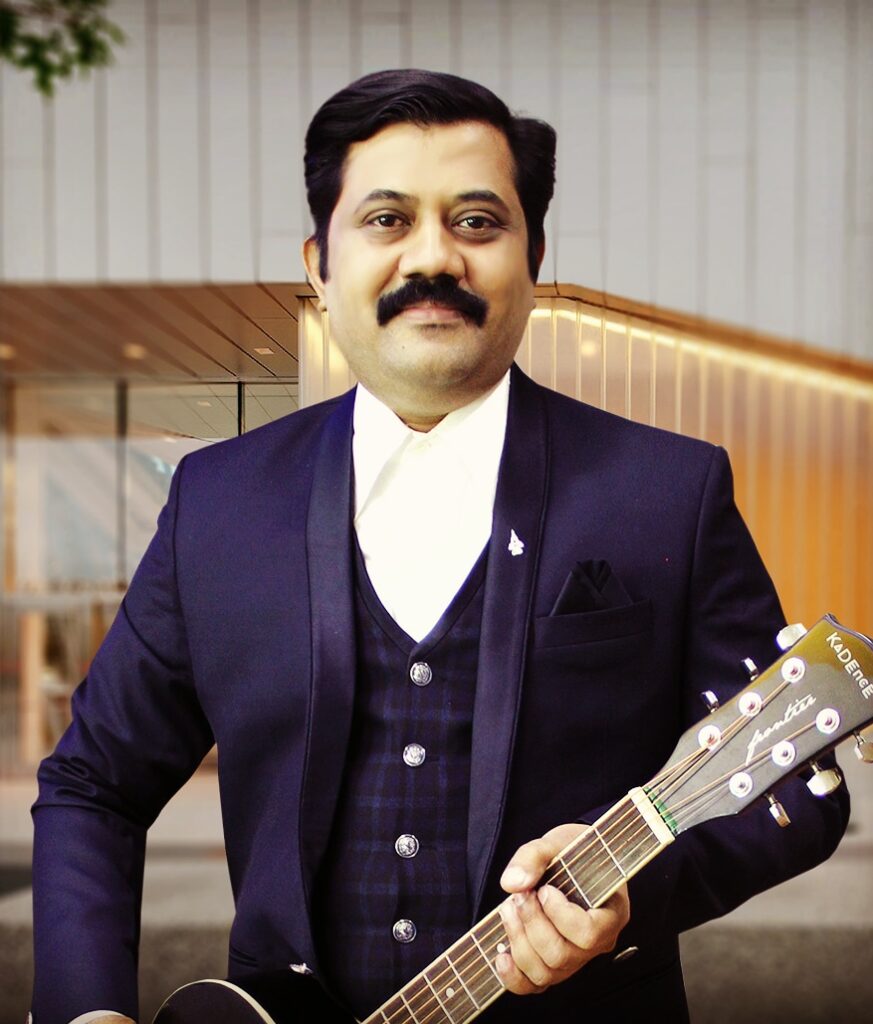 Mahesh Mahadev as a Music Composer

With his unique style of music compositions he has the gift of his music sounding soulful with a harmonic richness and melodic grace. He has composed various moods of songs including romantic, devotional, patriotic, pathos, fast numbers, energetic, children, comical, folk and motivational based songs showcasing his versatility in his music compositions which has received lots of appreciation from the audience.

He is also credited to be the first Composer and lyricist to write lyrics and compose songs on Lord Mahadeshwara in Sanskrit language. His song ‘Omkara Pranava’ from the album became a super hit and received numerous appreciations from musicians and music lovers. His album ‘Maharudram Mahadeshwaram’ attracted thousands of Shiva devotees musically.

The song ‘Omkara Pranava’ was adapted in Tamil movie ‘Maaligai’ in which Mahesh Mahadev is one of the composers of the movie.  In this song, few portions of the original Sanskrit lyrics were kept the same along with an addition of Tamil lyrics version with few changes with reference to the orchestration and tune suiting the movie song situation.

Mahesh Mahadev has composed for many innovative and experimental musical projects. He has used the concept of Graha Bhedam, the Modal Shift of Tonic in his Album ‘Kandenu Sri Ranganathana’ comprising ragas Chakravakam to a new raga creation by himself ‘Srirangapriya’. This composition is sung by Legendary Playback Singer Padmavibhushan Dr. S. P. Balasubrahmanyam. Another illustration of Mahesh Mahadev’s music proficiency is the rare  composition ‘Baarayya Govinda’ which is complex and unique with Modal Shift of Tonic (Graha Bedham) in Odd Time Signature comprising Raga Keeravani moving on to a rare combination of Ragas Amruthavarshini and Madhukauns, sung by Playback Singer Priyadarshini.

Mahesh Mahadev has not limited himself to composing for Movies, spiritual, devotional, Bhavageeth, other music genres. He has also written and composed Indian Classical Carnatic and Hindustani Music where he is known for his unique composing abilities in new rare ragas carving a niche for himself.

In Indian Classical Music, as a Vaggeyakara, Mahesh Mahadev has written and composed many Carnatic Varnams, Krithis, Tillanas and Viruttams. He has also used many complex swara patterns, popular and rare Carnatic ragas in his compositions. To name a few works, Devi Raga-Tala-Laya Malika, Shivaranjani Bhavabhanjani written and composed by him. He has also composed Viruttams, Devaranamas and Ugabhogas.

He has many Abhangs, Ghazals compositions to his credit. He has also composed inimitable Urdu and Hindi language Ghazals like ‘Zindagi Bhar’, ‘Dil ka Diya’. One of his Marathi language Abhang composition ‘Dhyan Karu Zata‘ sung by renowned Hindustani Vocalist Pt. Jayateerth Mevundi became an instant hit amongst music lovers.

Mahesh Mahadev has also composed many English songs in Western Music Genre. One of the special compositions of his in this genre includes tuning India’s Great Scientist ‘Padmashri’ Dr. Y. S. Rajan poem ‘Transforming the rickety’ which was widely appreciated.