India based artist and music composer Mahesh Mahadev™
just released her new EP. Listen for free and grab your copy.

Don’t forget to buy if you ♥

Mahesh Mahadev is an Indian Film Score Composer, Songwriter, Director, Writer, Singer, Multi Artist, who has made his mark in the Music Industry and in various fields of Arts. He is a versatile musician who has knowledge in Indian Classical Music – Carnatic, Hindustani & Western Music. He has composed many original music scores and soundtracks in Hindi, Tamil, Telugu, Kannada, Sanskrit, Marathi, Urdu, Malayalam, English, Spanish and many more languages.

Mahesh Mahadev has written lyrics in many languages for movies and private music albums. He is the creator of many Indian Classical Ragas who has more than 50 ragas in Carnatic and Hindustani Classical music to his credit. He has also lent his voice for many songs in various languages. He is also a Music Educator, Mentor, Vocal Trainer & Independent Researcher. 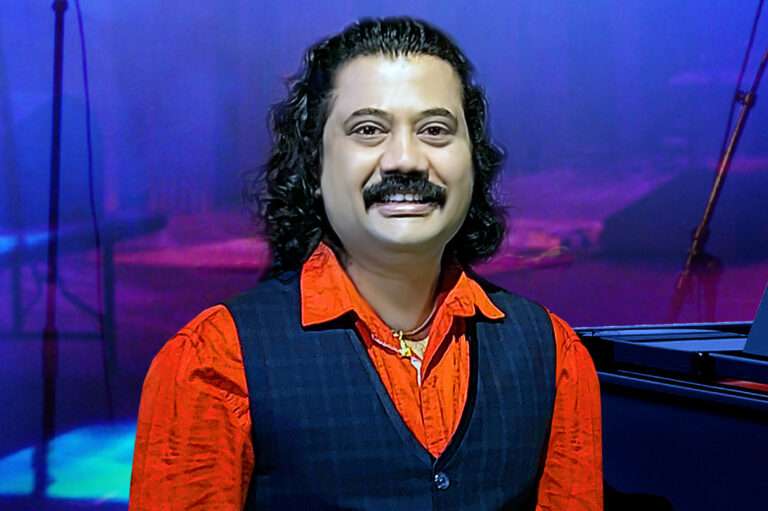 Excellent composition, I can visualise Lord Shiva dancing your song

You are very talented, I wish you all the Best

“Your Mudakarata Modakam song composition is soothing and beautiful, you have a lot of talent inside you as a Music Composer”. “And in my composition, you have written excellent lyrics too.” “Focus and work hard, success will be yours”

“You have done your job well and it is amazing”, “Mahesh, all the very best to you, I wish you more success in your musical journey”

Happy to see your raga discoveries

You composition is good, God bless you

“The songs composed by you on Lord Sri Amara Nareyana is good.”, “May god bless you and may you attain success in all your future endeavours”

Simply marvellous, I loved it

“This song Omkara is ultimate Mahesh, you have composed and written the lyrics really well and the landing in upper sthayi panchama swara is excellent”. “I wish to hear more such songs from you, I wish you all the best in your musical journey”

“I wish you success in your musical journey, focus on your work, kandippa success ungalukku kidaikkum, Best of Luck, Mahesh”

I feel you are an asset to our Film Industry, God Bless you Mr. Mahesh

“Your song is simply superb.” “I have recorded thousands of songs and I am really happy to hear a good classical based composition today, it is like honey flowing in my ears.” “You have done an excellent job, I am sure I will definitely record your composition very soon.”

Mahesh I wish you good luck in all your musical pursuits in the years to come!

“Mahesh, you are a down to earth and humble soft spoken student of mine.” “You are an excellent composer, singer  and arranger and I am happy to see your pristine devotional works propelling you to greater heights !”

Very nice composition Mahesh, I enjoyed listening to it”, “My best wishes to you

“You are very talented and your work is a reflection of that, I wish you all the success in your future endeavours”, “God bless you”

You are multi-talented, God bless you

“Mahesh, your compositions are nice to hear, happy to see your raga discovery”, “You have lots of potential and I am sure you will reach great heights in Music”, Best of Luck to you

“You are multi-talented, I wish you all the best to reach greater heights in the field of music”

“Achyutham Keshavam is lovely, nice composition” “God Bless you, All the Best”

You are a good musician, God bless you

“Proud of you and your compositions, I am sure I will play for your composition very soon, keep working hard and you will reach your goals”, “I wish you all the success”

You have an excellent music sense, God Bless you

“You have composed wonderfully, I wish you more success in your musical journey, soon we will work, Best of Luck to you”

Lovely and Lively composition, you have done a good job, All the best to you, Mahesh

“I wish you success in all your endeavors, May God bless you and may your songs turn out to become huge blockbuster hits”,“Appavoda blessingsum ungalukku irukkattum, Good Luck”

All the Best to you, Mahesh

“Your compositions are soulful, my best wishes to you for a bright future in the music & film industry.” “Keep working hard and I am sure you will reach great heights in this field, God bless you”

I enjoyed singing a wonderful composition, All the Best

“Mahesh, I liked your compositions, it is very soothing and nice”, “I wish to see you reaching great heights in this field and may god bless you with success”

Excellent composition, I enjoyed playing Guitar for your song

All the best to you, I loved your event

“It was a wonderful event with a good selection of songs, I enjoyed every moment of it.” “It was a well managed event, hoping to attend more such events, good luck to you in your musical endeavours.”

Mahesh you are very talented and dynamic person

“I can see your hard work, dedication and perfection in work, I hope to see you reach great heights and all the best for your future goals, god bless you dear”

All the best to you

“Whoever enters my studio will feel the positive vibes and what ever they pray  here it will come true.” “May all your dreams come true” good luck

It was a well organised event, I Appreciate your work Mahesh

“My Best wishes to you, Good luck for all your future works”

You are multi talented, I am happy see your growth in various art fields and music

“You will definitely reach great heights in all your desired fields, My best wishes to you”

Your composition is excellent, Good luck to you

It was a most memorable event, God bless you

“I am very pleased and honoured to be part of your Madhur Sangeeth event, the event was well organised and the songs were extremely melodious, happy to be in Bangalore.” “God bless you with success”

You are a gifted and unique gem with distinct talents

“I don’t think there are any art fields remaining where you have not touched upon and proven your talent.” “Be it Music, Painting, Designing, Sound, 3D, Graphics, Photography, Video you are a master in all.” “It’s an awe to see you work relentlessly in every desired field to achieve perfection in it.” “I admire your quenching thirst to learn every new thing that you come across without saying you can’t” “May success touch your feet, Sky is your limit, Keep soaring higher and higher”

You are a talented artist

Your raga discovery is commendable, God bless you

“I liked your composition and I appreciate your raga creation Thyagaraja Mangalam, God bless you.” “May you achieve great heights in the field of music”

All the best, God bless you

“I wish the program success and may you achieve the best in all your future endeavors, Good luck to you”

Tumba olle event madidira, you are a humble person

“You are serving and devoting your time to disabled sports too, all the best to you, keep continuing the good work.”

“Your tunes are mesmerising, I like all your compositions and my top two favourites are Ekaksharame and Andaja Vahana”, “You have sung the song well too, may your creativity keep soaring and wishing you success in all your projects”

I enjoyed your song

“Your composition of the ‘Transforming the rickety’, poem written by our Rajan was excellent, you have made the tune so catchy”,“Good luck to you”

I liked your concept of this event, all the best

“I enjoyed attending the event, it was well organised and the event concept by you was unique. My best wishes to you, God bless you”

Your composition is outstanding

“You have handled the sangathis and swaras in this song very well, overall it is a good composition.” “My best wishes to you, I hope to sing for your composition very soon”

Good Luck to you Mahesh

“Your compositions are good and I wish you all the success in your music projects.” “God bless you.”

Your compositions are simply wonderful

“You are a gifted artist and I enjoyed my poem ‘Transforming the rickety’, in the new raga ‘Rajasadhaka’ created & composed by you which Priyadarshini sang very well with great ease, your tune was excellent and hummable!

“Your dedication and sincerity will take you to greater heights, I wish you all the best in your upcoming projects, Olledaagali”

I wish you good luck in everything you do, May Appaji’s blessings be upon you

“May the musical event Madhur Sangeeth become a huge success and I wish you the best in all your musical endeavours, God bless you always”

You have organised the musical event very successfully, I enjoyed it

“You have many exceptional talents.” “As your father, it is a pride to see you accomplish and achieve in various art fields, you have a divine power in you which makes all your song compositions outstanding and first-class!” “I wish you huge success in all your artistic endeavours, raga discovery, you are bound to reach great heights in all your desired fields.”

All your music compositions are wonderful, you are a blessed child with many artistic talents

“Your talent to multitask as a business entrepreneur, designer, artist, sculptor, musician is amazing.” “As a mother, you have always made me proud with your achievements, I enjoy hearing all your music compositions.” “Few of my favourite songs of yours are Omkara Pranava, Narudu Gurudani and Narayana Stotram.” “Give your best in every opportunity that comes your way, success will be yours, God bless you”

Mahesh, you are a highly talented Music Composer & Multi Artist

“Your discovery of ragas is astonishing, all your compositions are very melodious. My personal favourites are Sharada Bhujangam, Omkara, Naaneu Balleno and the Narayana Stotram. You have composed excellently in my favourite ragas Darbari Kannada & Bhimpalas. You are a multi talented artist with god gifted skills. You will definitely go places with your dedication and hard work. I wish you the best in all your future endeavours, may all your dreams come true!”

B. S. Yediyurappa
Chief Minister of Karnataka
Read all testimonials